Long-overvalued technology stocks have been bloodied, but for investors looking to put money to work in the group, opportunities have started to appear.

An ugly first few weeks greeted tech investors during 2022. The sector has dropped 11.5% from its last high, marking an “official” correction with this drop of more than 10%.

A tech correction was needed, as the overall sector was seen as 18% overvalued at the end of 2021 by Morningstar analysts. As of Jan. 21, 2022, the tech sector is only 2.4% overvalued. Coming into the year, tech stocks were among the most expensive sectors in the market, but they now rank eighth out of the 11 sectors in the market.

As tech firms slid, some company valuations have dipped back into a price range our analysts find attractive, including one of the biggest names, Microsoft (MSFT).

In fact, of the 130 tech companies in our coverage, Ansys (ANSS) is the only tech stock that remains overvalued at 1-star. The number of 4-star stocks jumped to 37 from 22 at the end of 2021. Fifty-eight stocks remain fairly valued with a 3-star rating. Only two stocks trade in the 5-star range: Palantir Technologies (PLTR) and Vontier (VNT).

To highlight the most-attractive entry points for investors looking for long-term growth in tech, we screened for changes in star ratings between Dec. 31, 2021, and Jan. 21, 2022, for companies in our tech coverage list. We added an additional filter to screen for firms with a competitive advantage, as designated with a narrow or wide Morningstar Economic Moat Rating. A list of all the results of our screen can be found at the end of this article. Below, we’re highlighting four undervalued wide-moat stocks. 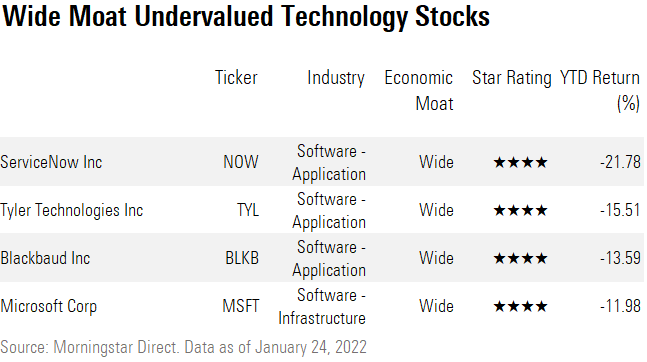 Microsoft made headlines recently, as the second-largest company in the world announced a $69 billion deal to acquire Activision Blizzard, a video game developer known for games such as Candy Crush, Call of Duty, and World of Warcraft. Microsoft has already been a leading player in the video game industry, and analyst Dan Romanoff does not see the deal as transformative. The tech slide dragged down Microsoft shares by 12% in recent weeks, leaving it trading at a 14% discount.

Microsoft has undergone a transformation into a cloud leader in the past few years, becoming one of two providers able to provide platform-as-a-service/infrastructure-as-a-service solutions at scale. “Azure is the centerpiece of the new Microsoft. Even though we estimate it to be a $30 billion business, it grew at a staggering 50% rate in fiscal 2021” says Romanoff.

As Microsoft reorients more of its products to become cloud-based, Romanoff sees the company as the most comprehensive metaverse play for the next decade. “Customers will continue to drive the transition from on-premises to cloud solutions, and revenue growth will remain robust with margins continuing to improve for the next several years” he says.

ServiceNOW, a software provider for IT service management needs, such as automating workflow processes and providing a single platform for companies’ IT needs, fell nearly 21.8% in recent weeks.

ServiceNOW’s offerings are considered high-end in both the IT service and IT operations management markets, with its clientele among the largest enterprises in the world. The company has worked to expand its automation offerings to meet the human resources, customer service, and finance needs of its clientele to further drive organic revenue growth. Romanoff assigns a wide moat to the company in large part because of high customer switching costs. He sees ServiceNOW’s additional offerings in customer service, HR delivery, security operations, and PaaS as meaningful contributors to growth in the next five years.

“We believe the underlying markets are large and growing. In early 2015, ServiceNow defined its market opportunity as $45 billion based largely on it being an IT operations management play. At its 2021 investor day, the company updated its addressable market to grow to $175 billion in 2024 from $135 billion today” he says. ServiceNOW trades at a 26% discount to its fair value.

Tyler Technologies fell 15.5% since the start of the year, leaving its shares trading at a 21% discount. The company provides a suite of software solutions for government operational needs for cities, counties, courts, and other local government offices. Services include enabling normal operation of government units, financial management, human resources, and so on. Romanoff sees Tyler as a leader in the niche government operational software market.

“There is a decade-long runway for normalized 10% top-line growth at Tyler, especially as demand for software-as-a-service accelerates and the need to modernize local governments’ legacy enterprise resource planning systems intensifies” says Romanoff. The company’s wide moat rating is supported by high customer switching costs. “Furthermore, Tyler benefits from a fragmented market that includes no companies at anywhere near its size or scale that are focused on the local public institution market.”

Blackbaud fell 13.6% in recent weeks. The company is a software provider for those in the “social good” community, such as nonprofits, foundations, educational institutions, and so on. The company enacts an acquisition strategy to bolster its offerings to its market, such as operation and program management, fundraising, marketing, and financial management. On Dec. 31, 2021, Blackbaud announced it has acquired EVERFI, a software company that enables organizations to deliver digital training for a variety of use cases such as in health, finance, and HR.

“Blackbaud’s market opportunity remains large. About 25% of charitable donations in 2020 were made on Blackbaud’s platform. With 1.6 million nonprofits in the United States, and only 40,000 customers, there is clearly room to grow in its core, which we think will help pull along domain sales. Management pegs its addressable market at $10 billion” says Romanoff.

Blackbaud’s wide moat is in part attributable to high switching costs, as well as intangible assets in its essential fundraising, donor-management, financial management, and related solutions, according to Romanoff. The company trades a 20% discount to its fair value. 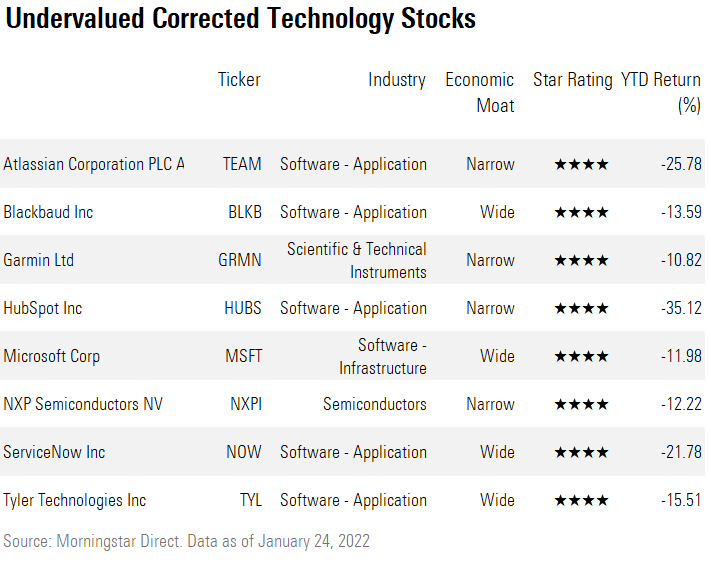