Apple cemented its move away from Intel on Monday, unveiling two new high-end laptop computers powered by its own “Apple Silicon” chips.

The new 14-inch and 16-inch MacBook Pro notebooks, which start at $1,999 and $2,499 each, respectively, both feature the “M1 Pro” chip, an iteration on the first Apple-designed M1 processors introduced a year ago.

Apple has been designing its own processors for the iPhone and iPad for the past decade, and its progress there, both on fast speeds and low energy consumption, has allowed it to begin powering its own laptop and desktop computers.

The move gives Apple an even deeper integration of its hardware and software with the intention of allowing developers to create apps that will function across smartphones, laptops and desktops.

The new notebooks were well received, with shares in the $2.4tn tech giant rising 1.2 per cent after the launch event.

Apple said the main processor for the M1 Pro was 70 per cent faster than the M1, with graphics performance about two times better. 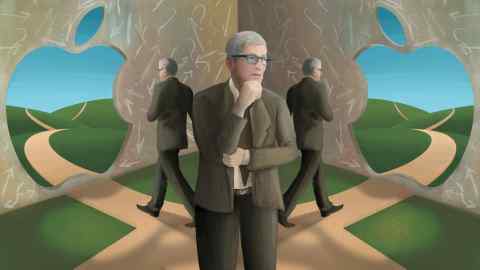 Apple took some heat on social media for both models having a large top notch that protrudes into the screen in the centre, but otherwise the borders are 60 per cent thinner on top and a quarter thinner along the sides.

Both new laptops feature the return of MagSafe, a well-liked magnetic connector for the cables that detaches if a user trips over the cord.

Mikako Kitagawa, research director at Gartner, said that while the high-end notebooks would find a market among those working in video and design, they might “offer a bit of overperformance for regular consumers who do not run graphic-intensive applications”.

Wedbush analyst Dan Ives noted that Apple was able to release the products just ahead of the holiday season despite the global chip shortage.

He called the new chips a “game-changer” and predicted they would convert more than 30 per cent of current MacBook users “to upgrade over the next year”, showcasing Apple’s beyond-the-iPhone growth levers.

Apple began taking orders for the laptops on Monday, with deliveries beginning next week.

Julie Ask, analyst at Forrester, called the event “solid” and said she expected Apple’s higher-end demographic to buy the products for the holiday season.

“Certainly among Apple’s core base — they are still optimistic, employed and spending money,” she said.

#techFT brings you news, comment and analysis on the big companies, technologies and issues shaping this fastest moving of sectors from specialists based around the world. Click here to get #techFT in your inbox.