“OLED screens in affordable machines” has been the running theme of the laptop market this year. Between Lenovo’s 13-inch Chromebook Duet 5 and various 13-inch Windows options from the likes of Dell and Asus, 2021 has really brought the OLED laptop from a luxury product to, well, somewhat less of a luxury product if you know where to look.

Asus’ Vivobook Pro 14 OLED is a shot at putting OLED in yet another unprecedented form factor: the midrange workstation. It’s poised to be the first 14-inch OLED laptop on the market, as well as the first OLED laptop with a 90Hz refresh rate. Of course, it won’t actually earn either of those monikers until it’s actually released, which it hasn’t been yet — Samsung (which makes the screen) and Asus are claiming “early 2022.”

Rather than being geared toward a multimedia experience — as are 13-inchers like Dell’s XPS 13 OLED, Asus’ own Zenbook 13 OLED, and Samsung’s Galaxy Book Pro — the Vivobook is here to work. It’s equipped with AMD’s capable eight-core Ryzen 9 5900HX processor and Nvidia’s GeForce RTX 3050 GPU. It’s targeting creative work, on the go, on a budget.

With that in mind, my test unit (16GB of RAM, 1TB of storage) is a strong package for $1,199 — less than half the MSRP of a comparable 14-inch MacBook Pro. (Samsung gave me that price with the heavy caveat that it could change prior to release. You have my word that if that happens, I will change the Vivobook’s score accordingly and republish this review.) It has a good port selection, it’s not too heavy, and the speakers and microphones should suit whatever video calling needs you have. Still, there are odd things here and there that you won’t see in more expensive devices (and even plenty of others at this price point). It’s an impressive and powerful machine that still won’t be the right daily driver for everyone. 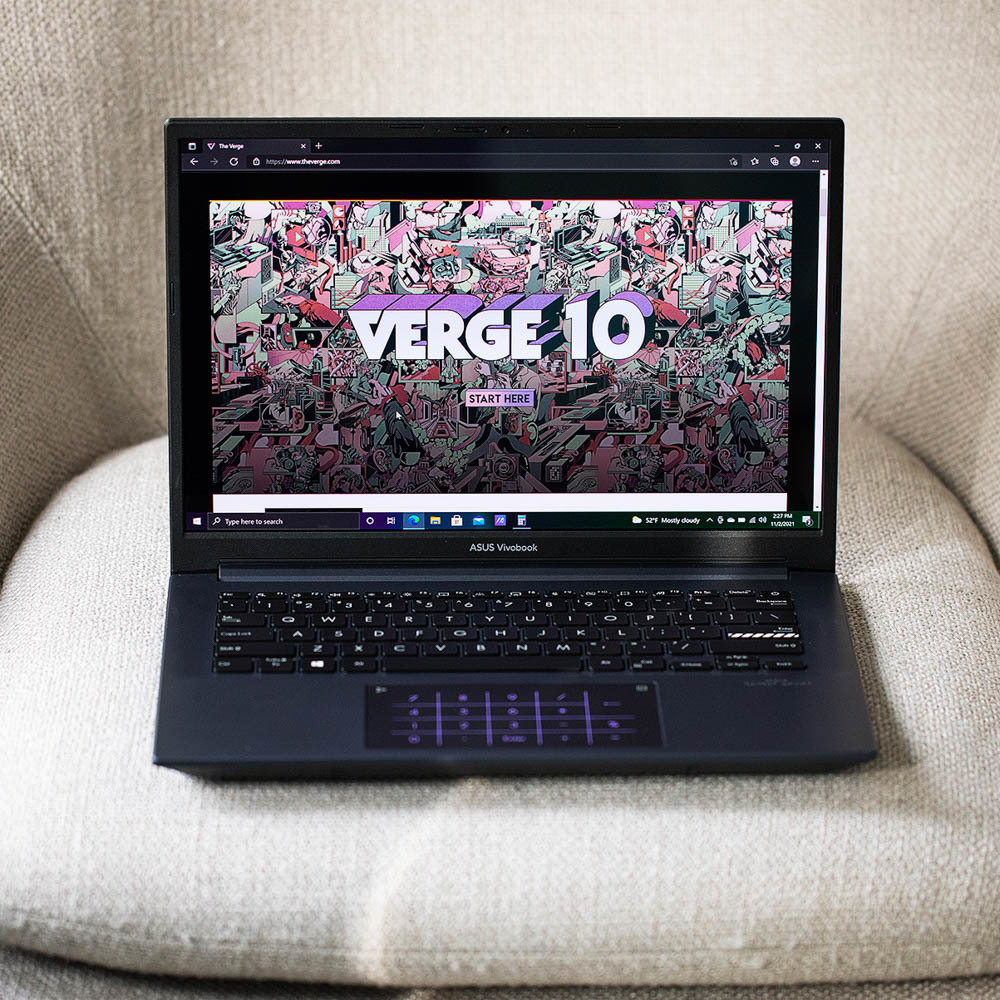 If you’re considering this Vivobook, it’s probably because of the screen. I’ll vouch for that: The 2.8K (2880 x 1800) 16:10 OLED panel is very nice and higher resolution than you generally see on OLED laptops of this size. It’s got impressive contrast, vivid colors, and sharp details, reproducing 100 percent of the sRGB color gamut and maxing out at 399 nits of brightness. The trademark of OLED technology, of course, is that blacks are totally black (since the individual pixels just turn themselves off). Samsung claims that the panel emits less blue light than other screens as well, and you can select an “Eye Care” color profile that yellows everything slightly in the MyAsus app.

The 90Hz refresh rate, while likely not a necessity for too many people’s jobs, is also a nice bonus. Scrolling is pleasantly smooth — once you get used to it, switching back to 60Hz is downright painful. This is certainly going to be one of the smoothest screens you can get at a $1,199 price point (again, assuming that the Vivobook stays there).

If the screen isn’t what piqued your interest in the Vivobook, then it was probably the chip. The eight-core Ryzen 9 5900HX in my unit is the most powerful processor that AMD makes for thin and light laptops. It’s unusual to see such a powerful chip combined with a GPU in such a small device — excluding Apple devices, this is one of the most powerful 14-inchers on the market.

You can take a look at the chart below to see how the Vivobook did on various synthetic benchmarks. It should go without saying that the Ryzen 5900HX and RTX 3050 are handily beating what we’ve seen similarly sized AMD machines with integrated graphics like the Zenbook 13 OLED.

The more important question for a lot of creative professionals is where exactly the Vivobook stands among MacBooks, which are the current gold standard and the machines we unambiguously recommend to anyone for whom money is no object — they also have exceptional screens.

The bad (but unsurprising) news for Asus is that the Vivobook got less than half the score that the 14-inch MacBook Pro got on PugetBench for Premiere Pro, which measures video export and playback time at 4K and 8K. (The MacBook got a 1072, to the Vivobook’s 494.) It also took twice as long to complete our real-world 4K export (though that task is a weakness of AMD’s and a strength of Apple’s) — it took seven minutes and 36 seconds, where the Macbook took just two and a half.

But it does get scores better than those of the 13-inch MacBook Pro (which is $700 more for comparable specs) on some of these benchmarks, and is comparable on most of the others. There’s a convincing argument that if you’re considering the 13-inch MacBook Pro for whatever reason, the Vivobook Pro is worth taking a close look at, too. (The 13-inch OLED Zenbook took over 14 minutes on the export and got a 201 on the benchmark.)

Also impressive was just how easy these tasks seemed to be for the 5900HX. The Vivobook’s fans were running throughout my benchmark testing, but they were always quiet enough that I could work on another device at the same desk with no distraction. CPU temperatures were very under control throughout the synthetic benchmarks — I saw some spikes during the export but nothing above the high 80s (Celsius). In other words, these famously CPU-heavy tasks weren’t working the Vivobook too hard.

Now, there’s a caveat to all this: battery life. The Vivobook’s battery life is not great, and it’s one area where the device is far behind everything Apple currently sells. That’s not necessarily surprising, given the high refresh rate and high resolution of the display. OLED technology is supposed to mitigate those penalties somewhat, since it’s turning off pixels here and there, but even operating in dark mode with a completely black desktop background, I only averaged six hours and 37 minutes of continuous use. (That was with a load of around a dozen Chrome tabs, with occasional Zoom calls and streaming video). That’s not a terrible result, but it’s worse than many laptops in this price range. The primary benefit of a 14-inch form factor is the ability to use it away from your desk, and battery life is likely a big consideration for folks shopping in this category. Six and a half hours just puts a sour taste in my mouth.

The other thing for “Pros” to note is that the configurations seem somewhat limited. The specs the Vivobook comes with may change closer to release (and I’ll update this review if they do), but from the sheet I was given, it seems like I have the top model. That means you can’t configure this device with more than 16GB of RAM and 1TB of storage, which — even with a capable processor — really limits what you can do with the device. (It’s not possible to upgrade the RAM or storage yourself after the fact, either.) Add the lack of Thunderbolt ports, which limits compatible peripherals such as external drives and docks, and you’re looking at a device that may be below the needs of many professional workloads. (There’s also not a 4K screen option listed here, if that’s something you need.)

The rest of this computer is pretty good. The audio is strong, with no distortion at maximum volume. The microphones did a fine job of filtering out loud dishwasher noise in the background of my Zoom calls. The keyboard is quite springy with a comfortable texture — I will note that the deck is a bit flimsy and my keystrokes sometimes depressed the deck, which I know is a thing some people hate (and I have a fairly light stroke, as they go).

One cool thing is that if you press a little button in the top right corner of the touchpad, an LED numpad pops up on it. (This is a staple of a number of Asus laptops.) It’s potentially useful, and it doesn’t get in the way of using the touchpad, but the button is sensitive enough that I occasionally pulled up the numpad with my palm by accident while I was typing. Slight annoyance.

Assuming this Vivobook stays at the price I’ve been given, it’s a great deal. It also seems like, as we said of the 13-inch MacBook Pro, a bit of a tweener. Realistically, I’m not sure how large the constituency is who’s looking for a processor this powerful with a discrete GPU but is also fine with just 16GB of RAM and 1TB of storage. The so-so battery life, given this device’s thin and light stature, may limit the audience further.

I see this mostly as a device for people looking for a primary driver who want to game or edit on the side. This is a good affordable option for that crowd, but you’re also somewhat getting what you pay for — editors, or others with GPU-heavy workloads, who can afford to spend a bit more on the 14-inch MacBook Pro should absolutely do so, and gamers who can live without the OLED screen can get a more powerful GPU, more RAM, and much better battery life in the Zephyrus G14.

But I’m still glad the package exists; 90Hz OLED screens are really a joy to use, and they’re a thing I hope we see more of at this accessible price point down the road. And with its Ryzen 5000 series, AMD continues to bring power to thin and light laptops that we haven’t seen in years past. This is more so an exciting thing to see than something I’d recommend most people buy. But it is very exciting.