The Media Archeology Lab lets visitors play, create and experiment with all kinds of technology from decades past.

BOULDER, Colo. — It doesn’t take much to travel back in time–just a quick drive to Boulder. In between the old houses on the University of Colorado campus sits an old basement with even older things inside.

“It has that basement smell,” Libi Striegl said with a laugh. “We’re kind of a hidden gem. We kind of fit in where they give us space.”

“We” is Striegl and the thousands of pieces of technology she surrounds herself with. The two-time graduate of CU Boulder manages the Media Archaeology Lab (MAL) on campus.

“The Media Archeology Lab is a space for collecting and experimenting with technology of all sorts from the past 12-ish decades,” Striegl said.

“Our primary collection is personal computing, so the history of home computers and mostly from the ’80s and ’90s,” she said. “But we have everything from record players and Edison phonographs to cameras, to game consoles, to typewriters, across the board. Anything that could have been made or used to make media, we collect to have this hands-on experience of the past.” 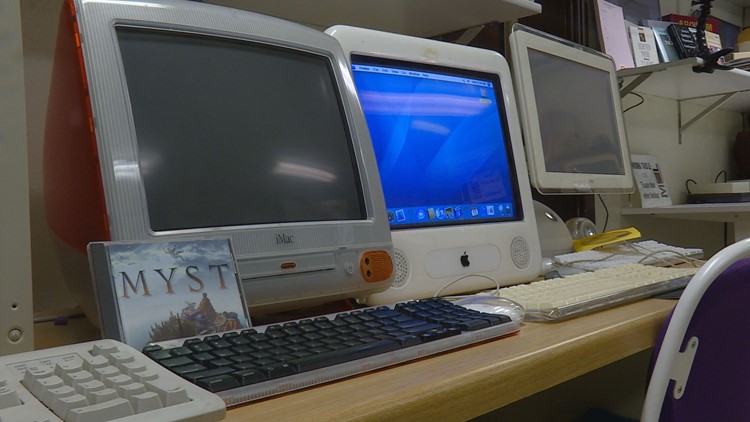 The MAL was created by Dr. Lori Emerson. Her work was initially looking at software poetry, an artistic way of demonstrating how technology can be used differently than how it was originally intended.

At MAL, anyone who walks in is encouraged to play with the gadgets and discover new ways to use them.

Striegl hopes the students who visit the lab will be inspired by what they find, and in turn, find new ways to push technology.

“We’re a very hands-on space, we’re not trying to perfectly preserve things and we want people to touch and interact with things and that’s why we use the word lab because it’s an experimental space because we want people to try turning stuff on that they’re not familiar with or like they feel like rearranging stuff? Totally fine,” she explained.

“Getting to touch it and hear it and feel it, and unfortunately, some of them are old and you can smell them,” she said with a laugh. “But you get the full-body experience, and that’s different than seeing pictures or seeing someone else use it online.”

On an October afternoon, a handful of CU students visited the lab for a class assignment. Most of them didn’t know it even existed. A group of five huddled around an old Mac computer likely built before they were born. The team was playing Oregon Trail, attempting to finish the trip before everyone died of dysentery.

Joey Miller was one of those students watching with excitement.

“I would come back here tomorrow if I’m able to,” he said. “With how fast technology is advancing, I think it’s pretty cool to see where it started and see how much it changed over the years. It’s a good way to appreciate all that we have now, really. That’s how I look at it.”

Striegl said comments like Miller’s are exactly why the facility is still operating. She hopes the lab’s visitors walk away with a little more appreciation for history and a lot more enthusiasm for what’s to come.

The Media Archaeology Lab is open to the public on CU Boulder’s campus. The facility has open-house hours on Mondays, Tuesdays and Fridays. Visitors can also schedule an appointment outside of these times on the MAL’s website.

RELATED: Southern Colorado music being preserved by this CU project