Now GPD has announced a new model is on the way with an updated processor, improved wireless and more storage. But the GPD P2 Max 2022 will also have a lower price tag. 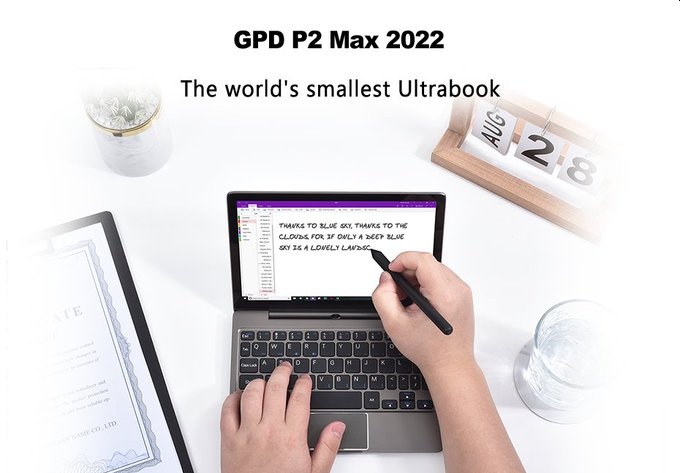 In a teaser posted to Twitter and YouTube, GPD outlines a few specs for its next-gen mini-laptop, including:

While the teaser image appears to show someone writing on the GPD P2 Max 2022 display using a digital pen, it’s worth remembering that the company showed the exact same image for the previous-gen model… which did not have an active digitizer to support pressure-sensitive pen input or hovering actions. Instead, the company noted that you could use a capacitive pen… just like you can with pretty much any phone, tablet, or laptop with a modern touchscreen display designed to respond to finger input.

The GPD P2 Max series stands out as more of a general purpose laptop computer that just happens to have a very small screen. The keyboard is large enough for touch-typing, although some keys have been shifted to unusual positions in order to fit on the small case. There’s a webcam (that’s awkwardly placed below the screen instead of above it). And there’s a touchpad below the keyboard instead of a smaller pointing stick or optical touch sensor.

While the P2 Max isn’t a pocket-sized computer like some other GPD devices, the first-gen model is still smaller than most laptops at 8.4″ x 5.9″ x 0.6″ and 1.4 pounds, allowing it to take up a lot less space in your bag. It’s unclear whether this year’s model will be exactly the same size, but the fact that GPD seems to be reusing an old promotional image suggests that most changes in the 2022 model will be under-the-hood.

While that means Intel is replacing a “Core” series chip with one based on “Atom” architecture, the new processor is a significantly newer chip manufactured with a 10nm process. It’s also a 4-core, 4-thread chip rather than a 2-core, 4-thread processor. And benchmarks suggest that multi-core performance is pretty similar (although the older Amber Lake chip comes out ahead in single-core tests).

But since the Pentium N6000 is a Jasper Lake chip designed for low-cost, low-power laptops, tablets, and mini-desktops, it should allow GPD to bring down the price of its new model, which will be a welcome change at a time when prices for mini-laptops and handhelds have been trending upward.

GPD says the P2 Max 2022 will be available from the company’s AliExpress shop soon, which will mark one of the first times that the company has launched a new product for global markets without running a crowdfunding campaign first.