Huawei laptops haven’t been widely available in the US for years. But they’ve traditionally been fantastic products, with good enough performance and build quality to make them serious MacBook competitors. So I figured I’d review the MateBook 16, Huawei’s latest flagship notebook, even though it may not be on the radars of our US readers. Consider this a resource for those in markets where Huawei is still operating but also a quick check on what the rest of us are missing out on.

On the outside, the MateBook 16… kind of looks like a MacBook Pro. Huawei’s got the colors and the general vibe down pat. Whether it performs as well as a MacBook is, of course, another question. Most of the MateBook 16 is great, from the speedy and comfortable keyboard to the all-day battery life, massive 3:2 display, and surprisingly powerful speakers. I know people who have replaced MacBooks with MateBooks as a primary driver, and I can see how for most office workers, the daily experience is quite similar.

But the main difference is that when I’m using a MateBook, I occasionally come across weird things. They’re not things that make or break the experience, but they’re just odd flaws for such a nice laptop to have. And they add up to make a product that’s great but not as great as it feels like it easily could be. 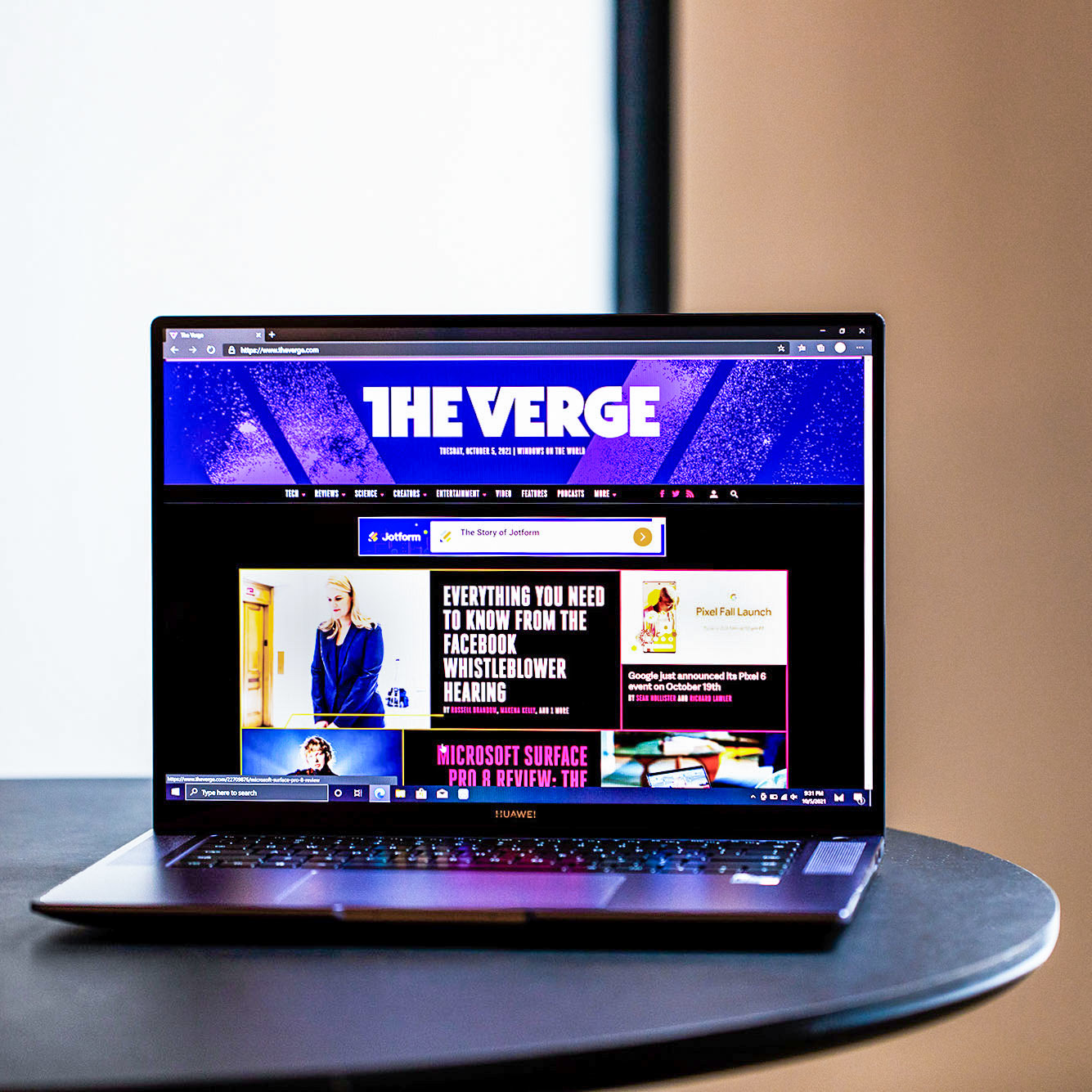 I should note, before we get too far into this, that the MateBook is only available in a somewhat limited number of countries. Currently, you can only order it directly from Huawei’s site if you’re in China or Germany as of this writing. (I can’t imagine it will be available within the US any time soon, given Huawei’s relationship with the Biden administration.) If you’re outside of those countries but are willing to ship one over, I have found models on AliExpress for as low as $1,259. My test unit, which has a Ryzen 7 5800H, 16GB of memory, and 512G of storage, is currently available for $1,469 on AliExpress. (Of course, the usual caveats about ordering from third-party sites apply if you’re going to shop there — you probably won’t recieve a warranty, you may need to get a separate charger, and you should make sure you’re buying from a reputable seller.)

The highlight of this device is the display

If you are able to get your hands on one of these, it has a number of selling points. It’s fairly light for a 16-inch notebook at 4.39 pounds. The trackpad is smooth and roomy, though it occasionally had issues with palm rejection. The keyboard is sturdy and impressively quiet — it’s probably the most MacBook-esque keyboard I’ve ever used on a Windows laptop (and I mean the recent models, not the god-awful butterfly ones). There’s a useful port selection with two USB-C, two USB-A, a headphone jack, and HDMI. The speakers are quite good, with bass that’s a bit weak. It’s got an unobtrusive, professional look.

The highlight of the device, for me, is the display. Not only is it a whopping 16 inches, but it has a 3:2 aspect ratio, which is my favorite laptop aspect ratio. (Yes, I have a favorite.) There’s a ton of vertical space, and I comfortably worked in multiple windows side by side; as someone who generally uses a 13-incher, the extra room feels luxurious. The panel itself, while not quite MacBook quality, still displays strong colors and sharp details and kicked back almost no glare. I enjoyed looking at it.

Now, for the weird things. The MateBook’s microphones come equipped with Huawei’s Ai noise cancelation technology that’s supposed to reduce echo and ambient noise, but coworkers said that it made me sound very weird on Zoom calls. It was clearly processing my voice while I was speaking; someone said I sounded like I was underwater. They could still hear and understand me just fine, but it’s an odd caveat to such a nice laptop. I’ve asked Huawei about this issue.

Another oddity: the SSD is partitioned? There are essentially two drives on the MateBook 16. I’ve asked Huawei why this is, but I really can’t fathom why this would be necessary on a consumer laptop. It seems likely to cause needless confusion and hassle — I had various downloads interrupted midway because they’d been dumped into a partition that didn’t have room, and I had to move a bunch of things around to accommodate a large folder I was trying to load that was well under 512GB but too big for either partition. Finding files and applications that I needed was also more complicated, because I couldn’t always remember which drive they were on.

And finally, the webcam. The MateBook has a nosecam that pops out of the keyboard’s top row when you press down on it. This, to me, is the equivalent of having no webcam — I’d rather be a black square on Zoom calls than have coworkers staring up my nostrils. So that’s also a thing.

The microphones made me sound weird on Zoom calls

Huawei enthusiasts can use a Multi-Screen collaboration feature to connect the MateBook 16 to a Huawei phone or tablet. You can then drag and drop files between the tethered devices, access their apps interchangeably, or use the latter as a traditional external display. I wasn’t able to test this, as I didn’t have any Huawei phones or tablets on hand, but it sounds convenient and similar to Apple’s Sidecar feature. It does seem that you have to enter a passcode every time you reconnect a device, which would probably drive me up the wall after a while.

The MateBook also connects easily to Huawei earbuds — per Huawei, the two gadgets will prompt you to pair them automatically if you put them near each other. Huawei is clearly moving towards a robust and developed ecosystem, though whether people buy in will likely depend on how well the features continue to work as new products are released. Regardless, it’s something I’m jealous of as someone whose Bose 700 come disconnected from her Surface Book at least a few times a week.

As a work driver, the MateBook’s eight-core Ryzen processor did an excellent job. The fans were silent under heaps of Chrome tabs, Spotify streaming, and Zoom calls. I was never worried about anything crashing or slowing down, and nothing was ever hot. You can switch to a dedicated Performance Mode by pressing FN+P, though I’m not sure where a user who doesn’t have Huawei’s reviewers’ guide would find that information out.

As we generally expect from AMD Ryzen 5000 systems, the MateBook did quite well on multi-core benchmarks and lagged behind a bit on single-core devices. It also did not blow any graphical tasks out of the water — AMD’s integrated graphics haven’t received a major update for a couple years. We saw an average of 15 frames per second on Shadow of the Tomb Raider at the MateBook’s native resolution of 2520 x 1680 and 28fps at 1920 x 1080. Neither of those is a fantastic gaming experience, and they’re significantly worse than what we saw from the 13-inch M1 MacBook Air.

The MateBook took 13 minutes and 44 seconds to complete our 4K export test. This isn’t a terrible result among AMD systems with integrated graphics, but it does underscore the delta between a system like this and a heavier-duty creative workstation (which people often expect 16-inch laptops to be). The most recent MacBook Pros, even the 14-incher, all took under three minutes for the same task. On the Puget Systems benchmark for Premiere Pro, the MateBook also landed far behind Apple’s machines, including the very similarly priced MacBook Air. None of this is to say that the MateBook is a bad laptop; it’s just to emphasize that you can get more graphics power for this price if that’s a priority for you.

What AMD’s chips tend to lack in single-core power, though, they often make up for in battery life. The MateBook comes with an 84Wh battery, and I averaged just over 10 hours of continuous use with the screen around 200 nits of brightness. (Huawei claims you’ll get 12.5 hours of “continuous local 1080p video playback,” so I guess take note if you do a lot of that.) That does beat the MacBook Air (although not by a ton) and many Intel laptops of this size.

To me, the battery life is the strongest argument in favor of buying the MateBook. It should get you through a workday with no problem, which is especially impressive considering the massive high-resolution screen. I’d love to be able to carry this around a conference, charger-free, and have so much real estate to work with whenever I opened it.

While the MateBook 16 seems like a notebook with the potential to have widespread appeal, the folks I’d most recommend it to are largely still Huawei superfans. The MateBook’s compatibility with other Huawei products is something that nothing from Apple or Asus can offer. I can see that benefit outweighing the odd drawbacks for people that already own other Huawei devices.

For everyone else, I think the MateBook could be a fine purchase for a general work driver, but you can get other laptops with most of the same benefits and without the weirdness surrounding the webcam, speakers, and drive. Even if MacBook Pros are outside your price range, many Ryzen devices have similar performance and battery life to the MateBook, as well as a functional webcam and microphones. The MacBook Air is basically there as well (and as bad as its webcam is, I’ll take that over a nostril shot any day). Basically, I think you have to really, really want the 16-inch, 3:2 screen for the MateBook to have a shot.