Remember when MacBook Pros had ports?

Back in 2015, my MacBook Pro had two USB-A ports, an HDMI port, SD card reader and two Thunderbolt ports as well as a MagSafe port for power.

Then Apple decided we didn’t need all those ports and took them away.

In 2019, my MacBook Pro had only two Thunderbolt (USB-C) ports, and I had to use one of them to charge the battery. If I needed to connect anything that didn’t have a USB-C connector, I had to buy an adapter.

I’m happy to report that in late 2021 Apple introduced its newest 14-inch and 16-inch MacBook Pros, and ports are back.

I’m also happy to report that the Touch bar, a tiny screen that took the place of the function keys, is also gone and actual function keys are back.

Oh, and while we’re celebrating — MagSafe is back as well.

The introduction of the 2021 MacBook Pros also marked the end of Intel processors in Apple laptops. Now all of Apple’s portable computers run on Apple processors.

They are a true “system on a chip,” which means the central processing unit, graphics processor unit cores, RAM and solid-state storage are all situated on one big chip.

For 2021 MacBook Pros, there are two new Apple M1 processors available — the M1 Pro and the M1 Max.

The CPU has eight cores (six performance cores and two efficiency cores). It has 14 GPU cores and a 16-core Neural Engine. A Neural Engine is designed to enhance machine learning, including image processing and speech.

All of it runs on a 200 gigabyte-per-second memory bandwidth, which is a fancy way to say that because Apple puts all the components on one chip, they are tied closely together for optimum speed and efficiency.

Apple has quite a range of options and pricing on the 14- and 16-inch MacBook Pros.

The 16-inch model gets even pricier.

There are pros and cons to the system on a chip model used by Apple. The components are all designed to work together very efficiently, but once the chip is assembled, there are no upgrades. You can’t put in more RAM or swap out for a larger SSD.

As of today, Apple has three M1 models in its laptops.

The M1 Pro is more than enough for the vast majority of users, but you should look at the Max if you are constantly pushing the limits of your current MacBook Pro’s processor, or you work with very large 4K or 8K video editing projects.

I’m a techie and an IT guy, but I have no need for any more than the minimum M1 Pro. My work is primarily office applications, some light photo editing and internet surfing and email.

Apple’s 13-inch M1 MacBook Pro or even the consumer-oriented M1 MacBook Air would be more than enough for my needs, but they both suffer from the lack of ports other than USB-C Thunderbolt.

It has an adaptive refresh rate of up to 120 Hertz.

The display uses mini-LED technology, and there is a notch in the screen where the front-facing camera lives.

Mini-LED displays light up the screen from behind, not from the edges, like older LED displays. Apple makes its own custom LEDs that are 120 times smaller than the previous generation.

The 70-watt-hour lithium polymer battery can play back video for up to 17 hours on a charge. It can provide up to 11 hours of web surfing.

It ships with a 67-watt power adapter and a USB-C to MagSafe 3 cable. As you might remember, MagSafe is Apple’s way of connecting the power cable to the laptop with magnets, so that you don’t break anything if the MagSafe cable is accidentally yanked. It will just separate easily from the computer.

Onboard ports include the MagSafe power port, three USB-C 4 (Thunderbolt 4) ports (which can also be used to charge the laptop), full-size HDMI, SD card reader and headphone jack.

There is a fingerprint reader in the power button and the top row of the keyboard is back to physical function keys. My current 13-inch M1 MacBook Pro has a Touch Bar and I’m not a fan. I’m glad to see it go.

The keys on the 14-inch laptop’s keyboard feel very good. They have good travel (the amount they must be pressed) compared with some previous models.

Let’s talk for a minute about size.

The 2021 14-inch and 16-inch MacBook Pros have a brand-new form factor. They look different from the MacBook Pros of the last decade or so.

They seem much taller than the previous few generations, but according to specs, there isn’t that much of a difference.

The screen case is a tad thicker and the bottom case is deeper, partly for the increased space needed for the ports and for a larger battery and two large cooling fans. The speakers also take up more room and they sound surprisingly great.

The feet on the newest model make it stand a bit taller. This is to help with airflow under the body.

This section has a lot of numbers. If you aren’t concerned with specifics, just know the M1 Pro is screaming fast and the M1 Max is even faster (and more expensive). Feel free to skip the benchmarks if you like.

I ran the benchmark app GeekBench 5 on the 2021 MacBook Pro along with the two previous generations to directly compare their scores. GeekBench runs tests on the CPU and GPU.

The M1 laptops have more cores, and they are speed demons. There isn’t much you can’t do with the M1 Pro or M1 Max.

Even the least expensive model was very impressive.

The difference in the laptop speed with Apple’s processor vs. Intel is very pronounced.

I liken it to the difference between a Corvette and an F1 racecar — they’re both fast, but the racecar is on a whole other level of fast.

The 2020 13-inch MacBook Air with the original M1 processor with 8 GB of RAM and 512 GB SSD costs $1,249, and although it has only two USB-C Thunderbolt ports, it is more than enough for everyday use.

The 14-inch MacBook Pro is everything I want in a laptop.

It has incredible speed, a fantastic screen, great battery life and most of the ports I need. It isn’t perfect. I’d like an Ethernet port, but the case is a bit thin to house it.

What I like is that Apple is giving users choices for the processor, and those processors are absolute beasts.

For decades, users had to give up performance for size if they wanted a portable computer.

Laptops couldn’t do the heavy lifting on jobs like 8K video editing — until now.

Apple has provided power users the opportunity to take their computers to work in places without power outlets.

Want to live the van life and camp in the desert and make YouTube videos? With the 2021 14-inch MacBook Pro, it’s all possible, even though it’s a bit expensive.

Bottom line: This is Apple’s best laptop, but it might be too much for casual users. 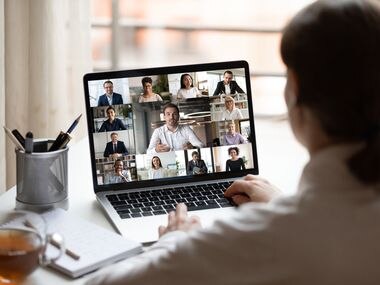