The countries with the highest rates of SMARTPHONE ADDICTION revealed – with China, Saudi Arabia and Malaysia topping the list

By Jonathan Chadwick For Mailonline

A new study has revealed the nations with the highest rates of smartphone addiction – and surprisingly, the UK is not even in the top 10.

Researchers at McGill University used data on smartphone use between 2014 and 2020 from nearly 34,000 participants in 24 countries around the world.

China, Saudi Arabia and Malaysia had the highest rates of smartphone use, they found, while Germany and France had the lowest.

Amazingly, the UK only ranked 16th out of 24 nations, while the US was even further behind, ranked 18th. 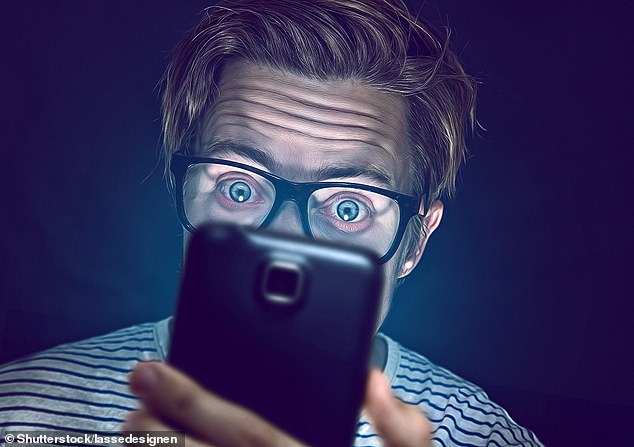 Smartphone ownership and screen time are increasing across the world, but there have been few attempts to quantify smartphone addiction on a global scale. Now, researchers at McGill University reveal China has the highest rate of smartphone use in the world 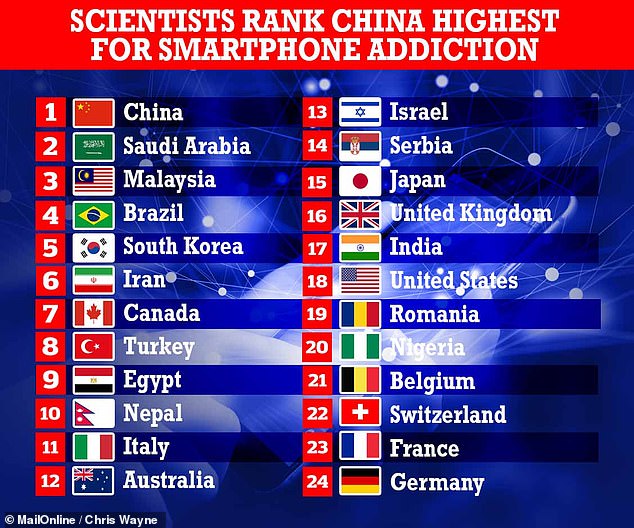 China, Saudi Arabia and Malaysia had the highest rates of smartphone use, they found, while Germany and France had the lowest

Researchers assigned each nation a score for problematic smartphone use, ranging from 10 to 60. China ranked highest, with a score of 36 out of 60

The study was conducted by researchers at McGill University in Montreal, Canada and published in the journal Computers in Human Behavior.

‘We conducted a meta-analysis of problematic smartphone use, focusing on young adults,’ the team say in the paper.

‘Problematic smartphone use increased across the world between 2014 and 2020, and we expect this trend to continue.’

For the study, the team looked at 81 previously published studies of phone use by adolescents and young adults, all based on the Smartphone Addiction Scale (SAS).

SAS is the most widely used measure of smartphone addiction, to ask about smartphone use in relation to daily-life disturbances, loss of control and withdrawal symptoms.

Researchers assigned each nation a score for problematic smartphone use, ranging from 10 to 60. China ranked highest, with a score of 36 out of 60.

For each nation, problematic smartphone use score (which can range from 10 to 60) is also listed.

Canada (based on a sample taken at McGill University) was also quite high, ranked at seventh and well ahead of neighbours the US.

The researchers suspect that a possible explanation for the differences may be varying social norms and cultural expectations surrounding the importance of staying in contact regularly through smartphones.

The countries showing lowest problematic smartphone use – Germany and France –are ‘individualistic and culturally loose’, so they may not subscribe to such norms. 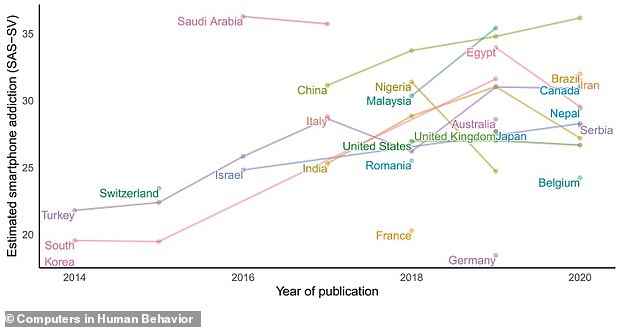 Overall, the results showed that problematic smartphone use has generally increased across the world, based on the meta analysis of studies published between 2014 and 2020

Overall, the results showed that problematic smartphone use is increasing across the world, which could have ‘psychological consequences’.

‘As organisations track objective measures such as smartphone ownership and screen time, it is also important to assess the subjective aspects and psychological consequences of this proliferation,’ the study authors conclude.

‘We hope our results help researchers and policy makers quantify and predict problematic smartphone use across the world.’

The team also recently launched a website for the public to assess their own smartphone addiction compared to others around the world.

The site also offers recommendations for people looking to reduce their screen time and peruse alternative – and potentially healthier – activities.

HOW SEVERE IS SMARTPHONE ADDICTION?

With the average age for a child to get their first phone now just 10, young people are becoming more and more reliant on their smartphones.

Worrying research from Korea University suggests that this dependence on the technology could even be affecting some teens’ brains.

The findings reveals that teenagers who are addicted to their smartphones are more likely to suffer from mental disorders, including depression and anxiety.

Other studies have shown people are so dependent on their smartphone that they happily break social etiquette to use them.

Researchers from mobile connectivity firm iPass surveyed more than 1,700 people in the US and Europe about their connectivity habits, preferences and expectations.

The survey revealed some of the most inappropriate situations in which people have felt the need to check their phone – during sex (seven per cent), on the toilet (72 per cent) and even during a funeral (11 per cent).

Nearly two thirds of people said they felt anxious when not connected to the Wi-Fi, with many saying they’d give up a range of items and activities in exchange for a connection.